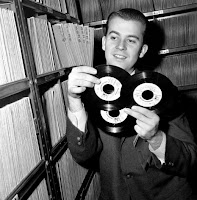 Dick Clark produced some great shows. I’ll always remember Where the Action Is and how excited I was when it first came out that summer. Through it, we got to know Paul Revere and the Raiders and I remember seeing The Young Rascals on that show for the first time. Another first for me was also one of the first concerts I ever attended. It was Dick Clark’s Cavalcade of Stars at Earl Warren Showgrounds in Santa Barbara. I’ll never forget how I lined up to buy tickets for the show in the outdoor arena. Such a vivid memory because it was all so exciting. I was still in high school doing shows with Ernie and the Emperors. All the band members were there that night. We had seats directly across from the stage...

The first group was The Kingsmen, doing their new hit song, Louie Louie. I remember front man Dick Eastman singing, holding his saxophone. I can even hear him singing it in my mind now, exactly how it sounded that night.


Seeing The Kingsmen do their hit was great, but we were there to see the headliners, who were none other than The Beach Boys. As I remember, after The Kingsmen did their set, it was a while before the next group started. The stage was totally dark and quiet. Then, all of a sudden, unexpectedly and out of the quiet darkness, the instantly recognizable melody came out over the sound system:


Round, round, get round, I get around…

It was The Beach Boys, starting their set. It sounded great, just like the record! It was a moment in time and in my musical history that I will never forget. That impact of hearing it as it broke the silence of that intermission between sets. It was such a night to remember. And I can even still see the tour bus in my mind, with Dick Clark’s Cavalcade of Stars painted on the side.

I’ll also be thankful for, and will always remember, Dick Clark for playing the Giant Crab song, Hi- Ho Silver Lining on American Bandstand. I was watching one Saturday and was surprised to catch him playing it. Then about a year later I was on campus at UCSB during my senior year when I ran into a fellow student and friend from grammar school, Joe Nunez. He stopped me on the way to class to tell me that he saw Dick Clark playing Giant Crab on American Bandstand.

Joe said, “I was going to school up in Oregon at the time, watching Bandstand one day, and I heard your song on the show.” I’ll never forget that moment. He was so excited.

Thank you, Dick Clark. Thank you for the music and the memories.