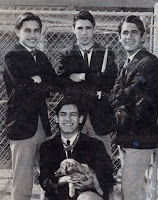 Ernie and The Emperors started their career as the opening act for the Isley Brothers at the Earl Warren Showgrounds in Santa Barbara. Soon after, having won numerous Battle of the Bands competitions, they were made the official house band for the venue. After signing a deal with Reprise Records in 1965, they enjoyed a #1 hit, Meet Me At The Corner (backed with Got A Lot I Want To Say), in the California Gold Coast locale of Santa Barbara, Ventura and San Luis Obispo counties. The Emperors carried out a full performance schedule that took them all over the state and won them thousands of fans. For a long time they held the distinction of being the Tri-Counties' top band. When bass man Randy Busby left, Denny and Kenny Fricia stepped in and the band changed their name to the Giant Crab. As each of the members were drafted into the military the band changed, but upon returning they re-reformed, releasing a string of singles and two LPs, quickly gaining a reputation as a hard rocking band. In 1968 Greg Munford, lead vocalist in the Strawberry Alarm Clock hit, Incense and Peppermints, also joined the Giant Crab as a studio artist and performed with the band in Wolfman Jack's California College Tour. Later, Greg Munford also performed in the Southeast Tour with the band.

In 1969 Ernie Joseph changed his musical direction with the driving rock Confusion album, teaming up with brothers "Ruben the Jet" (Brian Faith), Cory (Cory Colt), and drummer Steve Dunwoodie (Stevie D), to tour the southeastern states as Big Brother Ernie Joseph, a tour that included the Love Valley Music Festival near Greensboro, NC). While on tour they performed with the Allman Brothers Band, Bruce Springsteen & Steel Mill, members of the Marshall Tucker Band, Lynyrd Skynyrd, and Greg Munford and Ed King of the the Strawberry Alarm Clock.