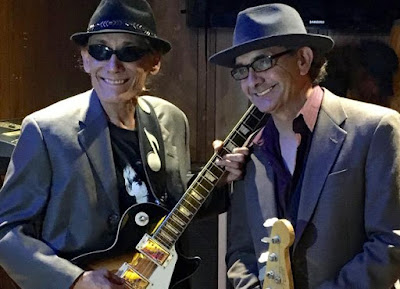 In 1965 a band of four good looking guys in matching suits and dog collars performed at the Dolphin Club and took us by storm. That band was Ernie and The Emperors (the core of which was the three Orosco brothers, Ernie, Cory, and Brian) and they hooked us with their Reprise Records 45 “Meet Me At The Corner.” Do you remember going to Bob’s Appliances to buy your records? The Emperors’ single hit the Top 5 not only in that shop, but also on all of the county’s radio stations. When they had a night off of their job as the house band at Earl Warren Showgrounds, they played all over the state and went on to make some pretty impressive tours as Big Brother Ernie Joseph, sharing the stage with the Allman Brothers, Bruce Springsteen, Roy Orbison, the Strawberry Alarm Clock, and many others. Their albums, including the iconic collectible, Confusion, are still selling, some fetching upwards of $300 per copy.

When they returned to Santa Barbara, they opened a recording studio where through the years they worked with such luminaries as members of Ambrosia, the Doobie Brothers, the Grass Roots, The Drifters, Herman’s Hermits, Missing Persons, the Marshall Tucker Band, Iron Butterfly, Steppenwolf, Toto, Vanilla Fudge, Tower of Power, and Canned Heat, as well as Katy Perry and Chaka Kahn. And the list goes on.

In 2012 Lillimar Pictures made a documentary on the band, Makin’ It, in which filmmaker John Ferry follows the musical careers of the Orosco brothers from when they sang for snacks at the market in their childhood State Street neighborhood, to today. In Makin’ It, Ferry caught the essence of what made Ernie, Cory, and Brian so popular with their audiences, and what has kept them popular all these years. Focusing on their dedication to music and to each other, Ferry delivers an intimate look into their lives and hearts. And heart has always been what sets them apart from other bands.

In more recent years the group has been performing under the name of The Brian Faith Band and, speaking as one of their original appreciators from the Dolphin Club, I’ll vouch for them. The years have been good to them. Their sound still is fresh and they still put on a good show. The dance floor is seldom empty once they get going! From Ernie’s prowess on lead guitar to Brian’s amazing voice and Cory’s mastery of any instrument he picks up, this band just plain rocks. But don’t think you’ll hear merely a great cover band. Just as they did in the 1960s and ‘70s, they have a huge catalog of catchy original songs, too. The band has been through a number of incarnations through the years so they’re more than qualified to please any audience, from those of us who love to experience a little nostalgia to those who enjoy taking in new bands. Whatever you want to hear, these guys will deliver, and they’ll do so with the magic they showed us back in the Sixties when they first thrilled us with their uplifting sound and their unique showmanship.

On Friday night, January 6, you’ll have the opportunity to see them when they perform at The Maverick Saloon (the old Barn where they used to perform in the Sixties) in Santa Ynez. If you’re an alumnus of Santa Ynez High School (or even if you're not!) you won’t want to miss this event!