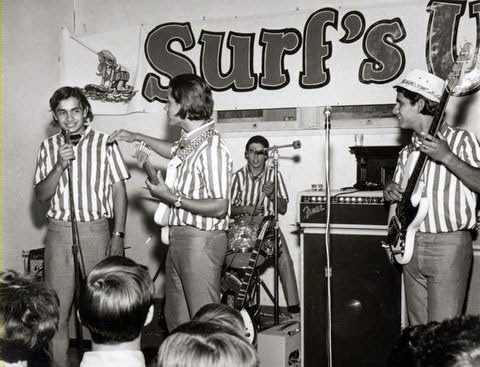 There has been a warm response from our friends on the Central Coast in support of Cory’s upcoming benefit shows. People from the media who remember the band are eager to promote the event and, through recent posts on Facebook, others have responded, saying that they remember Ernie and the Emperors and Giant Crab from our performances...

We played at many of the area high schools and colleges. There were other popular venues like the Santa Maria Fairgrounds, where we performed with Ed King of Strawberry Alarm Clock and Lynyrd Skynyrd, and there were similar shows at Alexander’s in Santa Maria, the Rose Gardens in Pismo Beach, Shore Cliff in Shell Beach, and the Madonna Inn, Shenandoah’s, and Surf’s Up, all in San Luis Obispo.

I hope people from the Central Coast will enjoy this photo at Surf’s Up. It was a great time. The crowds were so extraordinary, full of excitement and positive energy. It was a classic and genuine experience of sharing with our audience, the people of that community. I’m sure there are many now who often think of that era and cherish the memories of how it all came to be. This is a rare photo of all the band members on stage at Surf’s Up. It takes me back to how it was, all the good times, positive people, great friends, the sharing, the excitement, and those memories that will never be forgotten because those were special times that we will always remember and cherish so dearly. The Surf’s Up shows were certainly some of the “Best of Times” on the Central Coast for everyone who was there to make them so memorable.