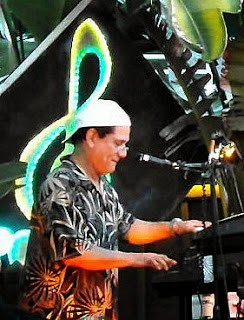 They were one of the first bands ever to play at Earl Warren Showgrounds back in the early 1960’s and the last to perform at Peabody’s in Montecito before it closed in 2012. They worked with such major artists of the era as the Allman Brothers, Roy Orbison, Deep Purple’s Ritchie Blackmore, Eddie Brigati (of the Young Rascals), Nick St. Nicholas (Steppenwolf), Kenny Cetera (Chicago), and Doug Ingle (Iron Butterfly) and later, locally, Toad the Wet Sprocket and Katy Perry in an earlier guise. For a while in the 1960s, they were the biggest band in the land, the 16-ton monster in the 805. But unless you’re a musician or local music fan nearing retirement age, chances are you’ve never heard of them...

That’s because Ernie & the Emperors’ biggest original hit came nearly 50 years ago, when Ernie Orosco and his younger brothers Brian and Cory, and their friend, Randy Busby, who played bass, were still in high school. “Meet Me at the Corner”, a catchy pop ditty heavily influenced by the British Invasion, hit number one on KIST, the big AM rock station in Santa Barbara in 1965, right after the band had signed to the Warner Brothers distributed Reprise Records, and the song also got airplay in Los Angeles and San Francisco.

But the band formed even earlier than that, when Ernie and his brothers, who lived with their parents on lower State Street, were still in junior high and put together the group to compete in talent shows.

“We just wanted to play for the schools,” Ernie recalled. “We played at our graduation, and then entered battle of the bands. But we loved it. Instead of sports it was all music for us. We rehearsed all the time and got really polished.”

The Emperors swept all of the competitions, which were pretty big deals back in those days. Then there was the slot opening for the Isley Brothers at the Showgrounds. It seemed like the future was limitless, but there was a snag.

The record company wanted us to tour with all these major acts, but my dad wouldn’t allow it, because my brothers were still in high school,” Ernie recalled. “And when he refused, we got dropped.”

The Oroscos ended up in the military during the Vietnam War for a while, and when they re-grouped, things had changed. The name shifted a few times, to Giant Crab, Big Brother Ernie Joseph, and then the Brian Faith Band, which is still in use today. They toured for a while with Strawberry Alarm Clock’s vocalist Greg Munford, who sang the one-hit wonder “Incense and Peppermints”, and in another guise made it down to the southeast in 1970 including a show with an estimated crowd of 250,000 people.

Back home, the music was morphing, too. The brothers eventually settled into a groove of touring playing mostly cover songs mixed with serving as recording studio session players, vocalists, engineers and record producers, almost always at their own shop, SRS Studios, which closed a few years ago, but not before helping to launch the careers of many local musicians including the Tearaways, Christian Love (Beach Boys), Toad the Wet Sproket, Dishwalla, Ugly Kid Joe, and Jewel. Cory and Ernie also recorded Katy Perry when she was still known as Katy Hudson and singing gospel music.

This spring, Cory was diagnosed with Stage 4 lymphoma. The disease and the treatments not only stole his energy and focus, it also curtailed the Orosco’s income, as they had to cancel summer bookings while Cory battled for his health, including a July 4 show at the Elks Club in Goleta.

When word got out about what had happened, Santa Barbara area musicians started coming together, offering their support and asking for the chance to perform in a benefit to defray some of the mounting expenses.

One of the preliminary benefits took place in Camarillo last weekend, and another was held at the Creekside Bar on Tuesday. The big fundraiser takes place Saturday, September 13, at the Elks Lodge #613, where Soul City Survivors, Night Train, and FOG will play, the latter with Ernie and Brian sitting in, following dinner and auctions. Tickets cost $35 & $70.

Another benefit show is slated for SohO on Friday, September 26, featuring performances by the Tearaways, the Pranks, Norman Allen and Rick & Patrick Miani. Admission is $15. Other events are in the works.

“There were so may musicians wanting to come out and support us, we’ve just kept adding shows,” Ernie explained. “They wanted to help us because we had helped so many bands along the way with our studio. The community really came together for Cory because we’d been there for them. That’s why they’re showing up for us now. It’s about brotherhood and sisterhood. They knew we weren’t into the money and recognition back then, just connecting with the community. So this all feels very warm and profound now.”