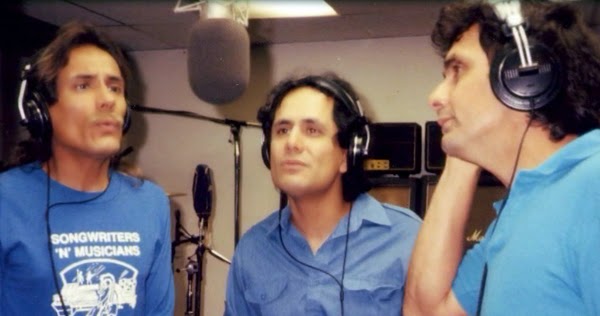 Santa Barbara’s Benefit for Raymond “Cory” Orosco is on Saturday, September 13 at the Santa Barbara Elks Lodge, 150 N. Kellogg Ave. Live entertainment from 6 pm to 11 pm will be provided by Soul City Survivors, Night Train, and the Fog Band. Also, Cory’s brothers, Ernie and Brian, members of Ernie and The Emperors (aka Brian Faith Band), will be sitting in with these groups. In addition to the live music show and dance, the event will also feature, dinner, door prizes, and an auction fundraiser. General admission is $35, and $75 for reserved seating at tables around the dance floor. Tickets are available by calling (805) 895-6040 and (805) 683-5646...

Ernie and The Emperors performed regularly at the Santa Barbara Elks Lodge and when Cory’s sudden cancer diagnosis forced the band to cancel their performances, friends who are also members of the Lodge were quick to offer their support in organizing what was to become Santa Barbara’s Benefit for Cory. As word got out about Cory’s illness, friends, family, and the local music community were eager to help. The event will bring people together for one evening, but there is another story emerging. It’s a story of how individuals, musicians, bands, and people from the community are coming together to offer support. People who remember Cory and brother Ernie Orosco from their recording studio and Ernie and the Emperors are all connected by the band’s performances and musical history in the area.

In addition to the upcoming event at the Elks Lodge, there is a similar benefit show for Cory planned in Camarillo on Sunday September 7. Brothers Ernie and Brian will join Michael Jay & the Mighty Cash Cats and the soulful What the Funk at the Sportsman Restaurant & Lounge (formerly the Bamboo Steakhouse) at 4426 Central Ave. The event will feature live entertainment from 3 to 7 pm, with prize giveaways and drawings. A $20 cover charge will count as your donation.

Then, there have been other local musicians who want to do other benefit shows for Cory. Several groups are showing support by uniting for a benefit show at The Creekside at 4444 Hollister Ave. in Santa Barbara. The show is set for Tuesday Sept 9 from 7 to 11 pm, with a $10 cover donation. The roster includes some of Santa Barbara’s most popular bands including James Antunez and Bongo Town, Victor Vega and the Bomb, Ed Diamond and Soul Biscuit, Billy D, Mark Orlando, and the Howard Miller Band.

There also will be a benefit show for Cory at Soho, 1221 State Street in Santa Barbara on Friday September 26. Bands who have come forward to help include the Tearaways, the Pranks, Norman Allen, and the Miani Brothers with Rick and Patrick Miani. Music starts at 9 pm with a $15 cover at the door.

Other musicians and bands interested in performing, or who have made a donation, include…

The Santa Barbara Benefit for Cory at the Elks Lodge started out with a few close friends who wanted to rally support, but now that effort has grown to include an entire community who also wants to contribute. Cory’s fight with cancer has brought people together; all of these people are contributing their efforts, skills, time and talent in an offer of goodwill for a cause that has touched their lives. Cory’s life—and his band, Ernie and The Emperors—is a story 50 years in the making that has touched many along the way. It’s a story about the spirit of giving and sharing and there is a growing community of people, musicians, friends, and family who want to show their appreciation and support.